Right now the East Coast Zombies are ruling, but in a couple of weeks the West Coast comes back in an undead way!

Here we are, two weeks to go before Season 2 of Fear the Walking Dead comes back to AMC, and as we’ve done with The Walking Dead, it’s time for Rachel and I to come up with some predictions about what we might see, and what we hope to see.

#1: Are the survivors from Season 1 going to learn to become monsters right away?

CF: The theme of the first trailer, No Safe Harbor, appears to set the mood for what’s to come, particularly with Kim Dickens’ (Madison Clark) voice-over of a variation Nietzsche’s famous “Gaze into the Abyss” quote: “To kill the monster, you become the monster. You stare into the abyss, the abyss stares back. It is alive… It is hungry… And it devours.” Just like zombies—I mean, The Infected:

To get all the personal stuff out of the way immediately, yesterday’s spa day was a lot of fun.  I needed to sit and get some pampering in, and to be with a friend who doesn’t mind talking about any and everything, and just be ourselves.  There was a lot of laughing going on, and when I arrived back home ten hours after I left, the first thought that popped into my head was, “It was a good day.”

Smiling long before I get my feet encased in melted wax.

In only two days nearly thirteen hundred words are written, and the penultimate scene is complete.  Not only did I put this scene to bed, but I passed two hundred and eighty thousand words in the process.  Only one short scene remains and this chapter and part are complete–

And I can then move away from Kerry being tortured by Girls From the Id.

Yesterday morning was the set up of the final dream, and as I mentioned there I needed to bring one other person to bring into this mix to make the scene complete.  And I don’t disappoint:

(All excerpts from The Foundation Chronicles, Book Two: B For Bewitching, copyright 2015, 2016 by Cassidy Frazee)

Annie took his hand and gave it a squeeze. “I’m right here, my love. I’ll not say anything, but remember I support you.”

He turned and smiled. “I know.” He returned the squeeze. “Not like we’re going anywhere, are we, Darling?”

Kerry straightened slightly and stared at the door. “Here we go.” He walked to his computer station and stood facing the entrance to his room. “Come on in.”

Annie saw the door open but didn’t see the girl as she continued standing in the hallway. Annie did, however, hear her soft, lilting voice. “I’m surprised you’re greeting me.”

“It’s not like I don’t know you’re coming.” He motioned his other dream self forward. “Don’t stand in the hall.”

The girl entered the room and Annie immediately noticed that she was dressed for sleeping though her attire was slightly different than Kerry’s, as she wore leggings and a cami top. Annie pursed her lips as her mind as she began imagining see this scene while awake. I wonder if Kerry will wear something like this to bed one night soon . . .

The girl gasped the moment she spotted Annie and Kerry rushed between the two girls to forestall any problems. “It’s okay: she was brought in here. You have to know that happens sometimes.”

The girl nodded. “Yes. I remember you both share dreams. I guess that’s why this one feels strange—”

“We must be in our shared dreamspace.” Annie held her hands in front of her. “We both think I’m supposed to be here.”

The girl nodded towards Kerry. “I know what he knows.”

Annie chuckled. “And a few things he didn’t.”

The girl’s cheeks blushed bright red, made even more obvious by the cascading ginger locks framing her face. “I was affected a bit by his block, but I did remember you. Only—” She sighed. “I couldn’t say everything ‘cause—”

“It’s okay: it all worked out eventually.” Annie looked the girl up and down. “What should I call you?”

“I know this will sound strange, but—” The girl’s vision shifted slightly to the left. “Kerry. I mean, that’s the name I was given when I was born, though no one knew that.”

“Because no one knew you.”

Kerry cleared his throat. “That’s gonna sound strange later on when this, um, you know—” He pointed between him and he girl self. “When people finally see you for real.”

Girl Kerry nodded. “I see how it could confuse people.” She glanced down for a moment. “So you are going to let me live.”

The thing Kerry’s been told from the start is that he holds this person’s life in his hands.  We now know what she meant with that simple phrase, and her it comes one last time:  “You are going to let me live.”

I should also point out something that may not be obvious:  Kerry’s given name is, as stated a few times, Kerrigan, and that is a gender-neutral name that is used by both girls and boys.  Is there a reason I’m bringing this up now?  No, not really . . .

Now that all the introductions are out of the way, only one thing remains for these two kids–

Kerry tossed his head to one side. “The way I understand things I don’t think I can stop you. But I’m not as scared now: I was told what this means and what to expect.” He reached out to Annie. “And I have support.”

Girl Kerry smiled at Annie. “And will I have your support as well?”

She nodded back. “No matter how either of you look, you’ll be the same person—the one I love.”

Kerry released Annie’s hand and took a step towards his female half. “I, um, guess we should do this.”

Girl Kerry nodded. “We should.”

Annie moved back closer to the bed. “What are you going to do?”

Kerry had the technical answer. “We have to integrate our auras, so—”

Annie glanced between the two. “That’s all?”

Kerry spoke first. “There’s really more than that going on—”

And Girl Kerry completed the sentence once more. “But that’s how it’ll look here.”

Annie watched silently as the two came together and embraced each other slowly, with Kerry’s smaller female version of himself enveloped by the taller male version. For a few moments all seemed the same, then she felt a lightness about her body, as if gravity were slipping away. The light in the room changed, growing dimmer and most defused, and Annie realized it was because gray astral mist was slipping into their space and filling in around the hugging couple.

While both halves of Kerry became obscured by the mist Annie felt herself being slowly pulled backwards and away from the room, and her last sight of her soul mate was a sudden flash of violet-purple light from within the cocoon of astral mist—

And there you go.  All that remains now is for–well, something–and then I can get to the business of closing out the school year–

Three parts, six chapters, and probably a couple of dozen scenes.  That’s all that remains.

I’m sending this out because it’s true: fear has turned us into a bunch of chickenshits.

In a very interesting article by Philip Bump arguing that the Clinton-Sanders race is very close, this graphic was interesting: 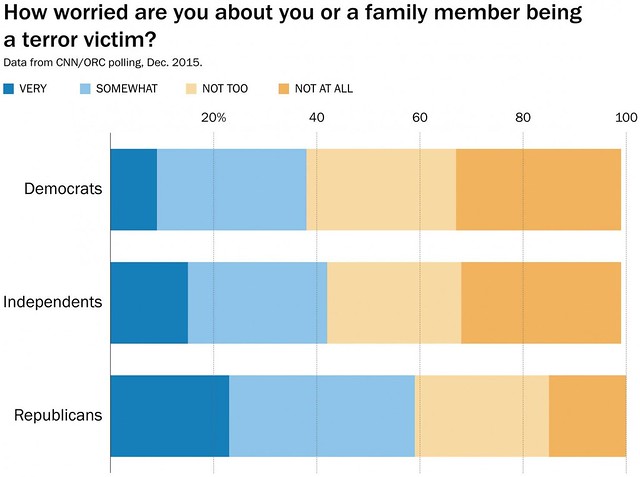 This is fucking stupid. At this point, one is supposed to don his Wise Pundit Thinkin’ Cap, talk about lizard brains, and note how awful we are at assessing threats.

Well, I’m not going to do that. The Republic is being hamstrung by a bunch of idiot chickenshit cowards who believe ISIS is going capture Ottumwa, Iowa. Or something.

If they were mentally ill, I would urge patience and decency. But…