So here we are, back for the second phase of Annie’s and Kerry’s Kali Test.  As the second phase is meant to be fought with weapons, that’s exactly what were going to get: an all-out weapons bash.

There’s no set up here–we just get straight to the action:

(The following excerpts from The Foundation Chronicles, Book Three: C For Continuing, copyright 2016, 2017 by Cassidy Frazee)

He had just hopped back up onto his feet when Ramona’s voice rang out just loud enough to be heard over the music. “Second Phase: weapons allowed.”

As the homunculi cross the white line and broke into a run Annie extended her right arm and levitated a weapon from the weapons rack four meters away. Normal levitation of this nature usually took anywhere from five to ten seconds, but Kerry and she had spent several months practicing fast levitation crafting. Needing to give most everything a geekish label, Kerry called this “Force Grabbing”, a phrase Annie actually found somewhat amusing.

A kampilan, a ninety centimeter Filipino sword with a spike tip at the end of the blade and a bifurcated wooden hilt, flew out of the weapons rack. A second later Annie wrapped her right hand around the hilt and deftly spun to her right. She whipped her head around and selected her target as her body continued turning, bringing the kampilan around. The long sword caught the first homunculus in the neck and decapitated it cleanly, blood fountaining into the air as the body skidded off to Annie’s right while the head continued flying forward. She twisted the kampilan around in her hand before bringing it back and down in a vicious downward slash across the face and torso of the second homunculus.

Kerry also did a Force Grab, but his weapon of choice was the traditional baston, a pair of seventy centimeter long rattan fighting sticks. Kerry struck his first homunculus several times in the head and shoulders before kicking it aside and turning on the second one. After quickly beating it upon the neck and torso he turned and smashed the third homunculus three times across the skull and face before smashing it and the second attacker several times against the sides of their heads, driving them back while cracking their skulls. He spun and moved to his right to attack the first homunculus with a series of vicious blows to the face, shoulders, and skull which drove it to its knees. He spun the bastons about in his hands and drove them hard into the homunculus’ damaged skull, crushing it and rendering the zombie dead.

Annie was busy dispatching her last two opponents. She’d already slashed one homunculus severely and had severed the right arm from the second. She was more cognizant of her footing now as the floor was becoming slippery with blood, and she’d found it necessary to adjust her grip twice due to blood sprays on the hilt of her kampilan. She decided it was time to end her opponents quickly. She brought the kampilan around in a cross body slash, decapitating her second homunculus, then swung the sword above her head and cleaved the skull of her last attacker. Leaving the kampilan in place she used a vicious Air Hammer to push both bodies out of the way in preparation for the last phase.

Kerry summoned two weapons as he faced his remaining attackers. This time his weapons were karambits, the dangerous curved knife found throughout Southeast Asia. Holding each one in traditional fashion with the top of the held by his thumbs in the curve of the blade facing him, he went after the first homunculus with a Redonda attack, slashing the creature across the face and neck in a continuous upward circular motion. He went at the second zombie using the same attack and after nearly disemboweling it and the other, he spun both karambits around so the blade tips faced his body, then drove his left one through one homunculus’ left eye while sticking the right one through the skull of the other zombie, killing them both.

He stepped away from the mess he had created and cast a glance at Annie as Ramona’s voice boomed out again. “Third Phase: all attacks allowed.”

As you may have gathered from reading the short excerpt, my kids love to get bloody.  And when it comes to their weapons, they don’t hold back.  One of the interesting things about Kali martial arts is that you learn weapons first and hand-to-hand second.  Kali is primarily a weapons based fighting form and the use all sorts of weapons, including improvised weapons like scarves, chains, ballpoint pens, anything that can be used to inflict damage and possibly even kill another person.  Most of the hand-to-hand moves learn later are nothing more than weapons forms done without weapons.  Kali relies primarily on muscle memory, so once you learn a particular form with a weapon, you can do the same thing with the life hand.

Now, let’s take a look at the weapons…

Annie’s weapon of choice is the kampilan, a traditional sword found in the Philippines.  This sword has been around for a long time and was the weapon used to kill Ferdinand Magellan when the locals decided to kick his ass out of the Philippines back in the early 1500s.  And from what little research I was able to do, it appears this was also the weapon of choice of Princess Urduja, a legendary warrior princess of the Philippines from the fourteenth century.  So it appears that Annie is in good company, weapons wise.

Kerry went the simple, direct route.  He went with two extremely traditional weapons found in the Philippines, but are nonetheless just as deadly as Annie’s sword.  The first is the baston, a ratton fighting stick that when used properly can disable and even kill another person. How is that possible?  Because when used properly, someone wielding a baston is actually wielding two and their hitting their opponent may be a couple hundred times in a minute.  That’s gonna leave a mark.

And then there’s the karambit, the curved knife that you’ve likely seen used several times in movies.  This thing is razor-sharp and can take out a person without a problem–particularly if the person wielding the knife knows what they’re doing. And as we’ve seen, Kerry appears to know what he’s doing. 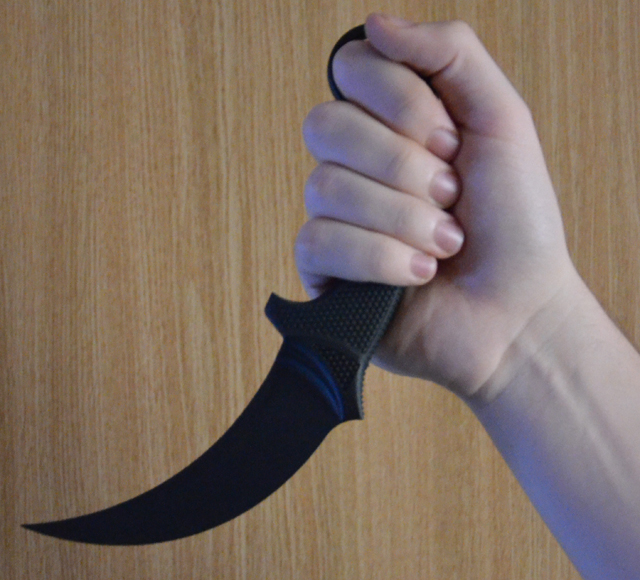 Now, I put together a short–about five minutes–video showing most of the motions used by my kids.  When I show the karambits, I’m doing my version of a Redonda attack:  Kerry would do it much better.

So there you have it: the second phase of the Kali Test over.

And just when you thought it couldn’t get any worse…

47 thoughts on “The Kali Test: The Second Phase”

I Want to be Part of the Craziness! Let Me Say This: Cancel reply

This site uses Akismet to reduce spam. Learn how your comment data is processed.